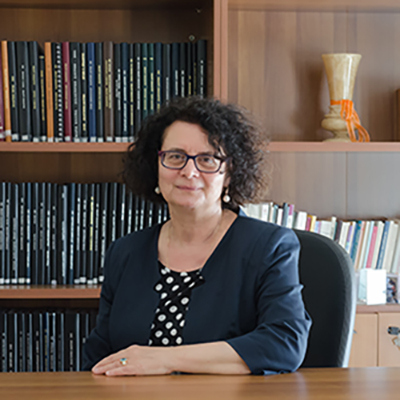 Maria Kanakidou graduated for the department of chemistry of the National and Kapodistrian University of Athens (1984). She has a MSc on chemistry of pollution (1985), PhD on Chemistry of Air Pollution and Environmental Physics (1988) and habilitation in Chemistry (Study of the impact of volatile organic compounds on tropospheric chemistry) (1993) all from the University of Paris IV.

From 1989 to 1991, she worked as post-doctoral researcher in the modeling group of Paul Crutzen (Nobel prize in Chemistry 1995) at the Max Planck Institute for Chemistry, Atmospheric Chemistry Division in Mainz, Germany. In 1991 she has been elected as tenure researcher at the French National Research Center (CNRS) in Gif-sur-Yvette France, where she worked for 6 year. In 1997 she has been elected as Assistant Professor at the Department of Chemistry of the University of Crete, promoted to Associate Professor in 2002 and to full Professor at the same department in 2008.

She served/is serving as member of several international scientific committees and advisory boards; she is recipient of the H. Julian Allen Award 1998 of NASA, and of the Vilhelm Bjerknes Medal for atmospheric sciences of the European Geophysical Union (EGU 2016).

Her research is centered on atmospheric composition changes, gases- aerosols interactions, aerosol/ radiation/clouds interactions, biogeochemical cycles, climate and how these are affected by human activities.